GROWING UP IN THE MILITARY: A DAUGHTER LOOKS BACK

All     Latest News
Back to posts + Bookmark Article 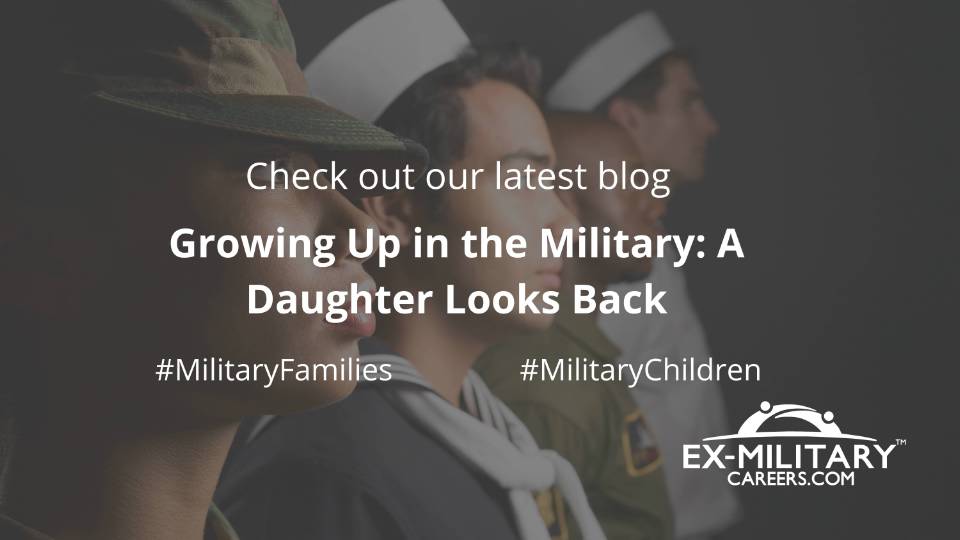 Every child’s experience of growing up with a parent or parents in the military will be different.  This is an interview to support Military Child Month with a daughter whose father was in the military – in the British Army -  for 24 years.

WHEN DID YOU REALISE THAT YOUR DAD WAS IN THE MILITARY?

I think I realised my dad was in the army, when he would come back from somewhere – I didn’t know where - and I would remember the smell of the Bergen and he would share his ration pack of sweets that he had not used.  This was my earliest memory from the age of about 5.

HOW DID IT MAKE YOU FEEL?

I have always been proud of my dad, he taught me from a young age the importance of standing up for yourself, the meaning of family, being proud of your achievements but also that the weakest link in a team is a reflection of the team.  Although he tried to instil the neat and tidy gene (very strong in the army), this is something I rebelled against, growing up.  But I do understand the importance of keeping a clean and clear mind, at least I hope that was the life lesson from him.

HOW DID YOUR DAD BEING IN THE MILITARY AFFECT YOUR LIFE?

When your parent is in the Military, it’s hard to make lasting friendships.  Until I went to boarding school at the age of 13, we were constantly moving every three years so, every three years, you had to start again - you had to make new friends and try and fit in again in a new environment which was hard.

WHAT WERE THE GOOD THINGS ABOUT HAVING A DAD IN THE MILITARY?

We got to see the world, try new cultures, experience activities such as shooting, canoeing, looking around helicopters, travelling on chinooks, doing my first parachute jump on my 16th birthday.  Having family time when he returned was brilliant.  I am sure he felt guilty so he was a super fun dad when he returned.  It’s only now that I reflect that my poor mum had to be both parents, particularly the disciplinarian and the ‘bad guy’ - she never got to be the fun parent like I am with my own children.

DID HE TALK ABOUT HIS WORK?

My dad never really talked about his missions, or line of work, but we had a sense of the importance of it.

WHAT WERE THE NOT-SO-GOOD THINGS ABOUT HAVING A DAD IN THE MILITARY?

He tried to treat us like his junior soldiers at times in terms of discipline.  But I understand now as a parent myself, that this was due to fear and wanting to instil safety rather than intentionally negatively impacting on a child.  My parents were both very strict and you definitely did not speak back.

DID YOU LIVE IN OTHER COUNTRIES?

We lived in Germany, Holland, Northern Ireland, and England- it was amazing living in different cultures and when we lived in Europe, Dad would think nothing of taking us on adventures to visit neighbouring countries for holidays or to take us for different experiences.  Despite the lack of in-car video entertainment, he kept us entertained for hours.

WHAT HAPPENED WHEN YOU WERE 13?

As I said, until I was 13, I moved schools every three years.  Then, at 13, I went to boarding school.  Both my parents recognised that I needed the stability and would flourish in that environment and, although they were financially and emotionally impacted by sending me there, they put my needs before their own, and I am eternally grateful as I am sure I would not be where I am without this selfless act.  Of course I missed the family but the chance to be in one place, build proper friendships and have consistent teaching – and teachers – was invaluable.

DID YOUR DAD SERVE OVERSEAS WITH THE FAMILY BACK AT HOME – SO YOU WOULDN’T SEE HIM IN PERSON FOR A PERIOD OF TIME?  IN DANGEROUS SITUATIONS MAYBE?  WAS THIS A BIT FRIGHTENING OR WORRYING?  DID YOU HAVE PEOPLE TO TALK TO ABOUT THIS?

My dad did serve overseas.  I am not sure I was told at the time where Dad was going, just that he was going away ‘on exercise’.  I do not ever remember worrying about where he was.  Communication devices were not the same as today, so it was normal for us to have no communication at all.  My mum did an amazing job of looking after both my brother and I emotionally growing up; even though now I am sure she was worried, she never displayed this to us.  I never felt the need to have to talk to someone as my mum created such a loving home for us that we always felt physically and emotionally safe.

HAS HIS ROLE GIVEN YOU SOMETHING THAT YOUR FRIENDS IN CIVILIAN LIFE DON’T HAVE? OR DON’T UNDERSTAND?

I think it’s given me an insight into levels of friendship civilians don’t really see.  You will never truly understand that level of military comradeship, until you have been in a situation where you are literally relying on somebody else to save your life and that, because of them, they are the reason you are alive and back with your family.  I remember that my dad had a friend who would come to stay with us.  He was called Henry and they worked together in Kenya.  The bond that they had and the ease and warmth of their friendship - it was amazing and, only now as I reflect on it, I realise I am slightly jealous of that bond.

HOW WAS IT WHEN HE LEFT THE MILITARY?

It was a mixture of emotions when my dad left; it was the right time for him, but I also recall how uncertain it was.  We were happy that we would be in our forever home, and close to family and grandparents, but it was a hard adjustment for my dad.  The rules of military life do not apply in civilian life; the respect and communication were very different for him.  I remember conversations with him about why people cannot do things correctly in the first place, rather than keep messing up.  For me, I was about to leave for College, so I was probably concentrating on my life adjustments rather than on my parents’.  My dad’s never lost the neat and tidy gene and my parents’ home is still in impeccable order, and now my children have bedroom checks when they go to stay.  Everything is labelled and organised there, and you will not find a piece of equipment in the house that can’t help you to do your job efficiently!

IT’S MILITARY CHILD MONTH.  WHAT WOULD YOU SAY TO CHILDREN IN THE MILITARY NOW?  WHAT ADVICE WOULD YOU GIVE THEM?

My advice to military children now, would be – be kind to yourselves and to your family, you are in an environment very different to what other children experience.  Take all the opportunities thrown at you, camps, outdoor activities, experiences that civilians would never encounter.  These will all shape how you grow emotionally and increase your resilience in the world.  When your parents say no, remember they have seen dangers we will never understand; they are coming from a place of love - and fear.  So, communicate clearly and concisely, and talk to them in a way that will help them understand and work with your point of view.